Year Two of the Damn Dirty Geeks podcast starts off big with our first podcast guest of 2016, director/executive producer/special effects master Greg Nicotero, who joins the DDG for two hours discussing one of our favorite films, Steven Spielberg’s thriller JAWS.

In Part 1 of our evening with Greg Nicotero, he shares how seeing JAWS in 1975 prompted many nightmares as well as his earliest aspirations to learn how such movie creatures were made. Greg also unspools his tale of how his family captured and kept a 9′-long shark on their wall — a telling omen for a Pittsburgh boy who grew up fascinated by the challenge and process of recreating the beast from JAWS. (Listen to Part 2 of our show with Greg here)

I got into special effects because I wanted to build the shark from JAWS. — Greg Nicotero

The DDG also discuss with Greg the crucial differences between Peter Benchley’s best-selling novel and Spielberg’s more streamlined, personal and terrifying film adaptation that scared a generation of movie fans. We debate the effects of the malfunctioning mechanical shark on Spielberg’s shots and scenes keeping the shark a secret until its dramatic revelation… and how difficult it is to develop suspense in films when modern audiences have such short attention spans. 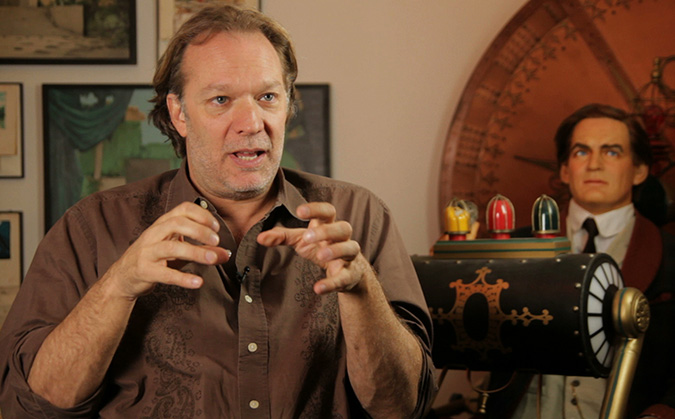 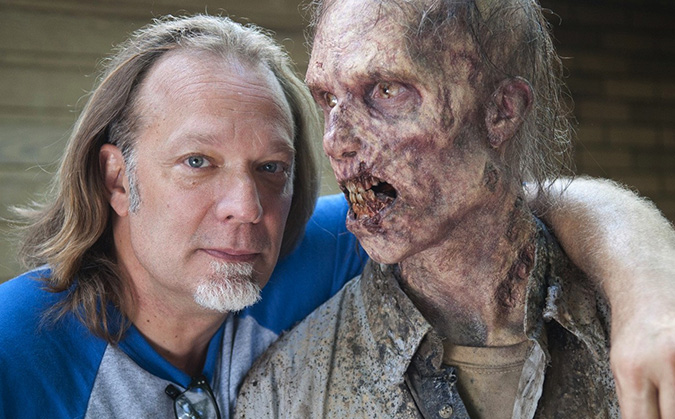 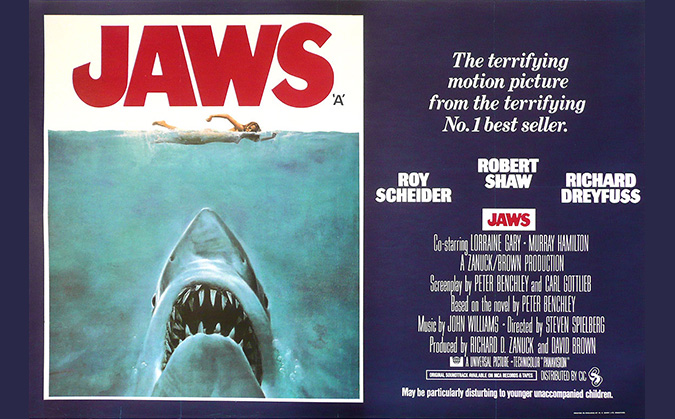 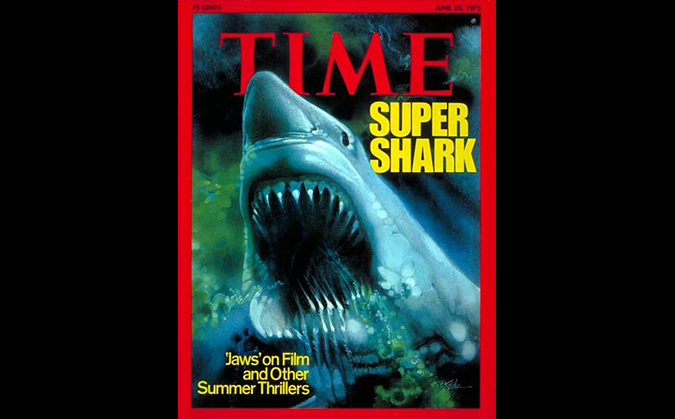 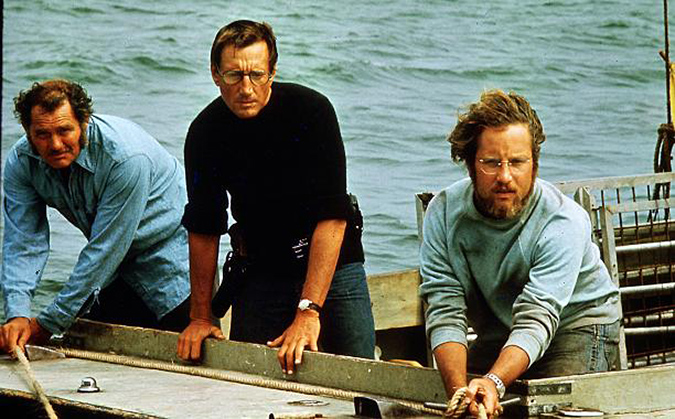 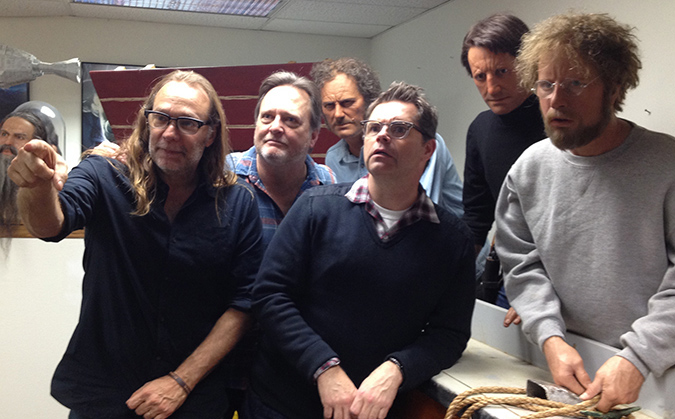 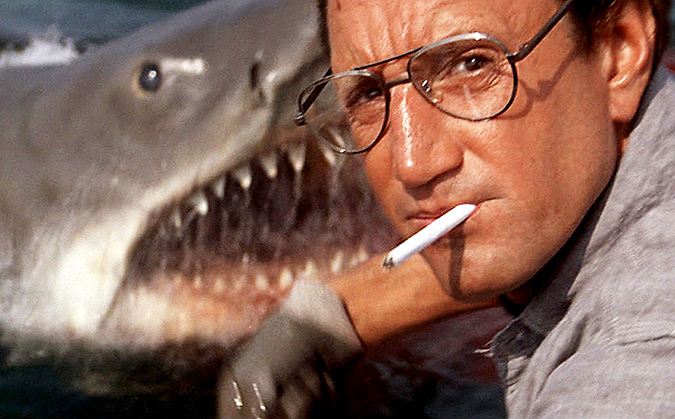 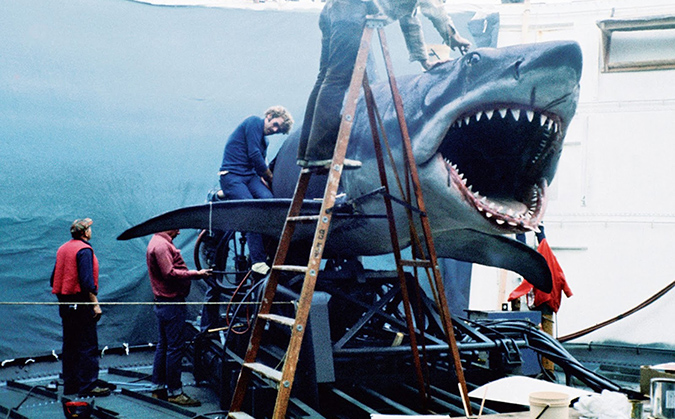 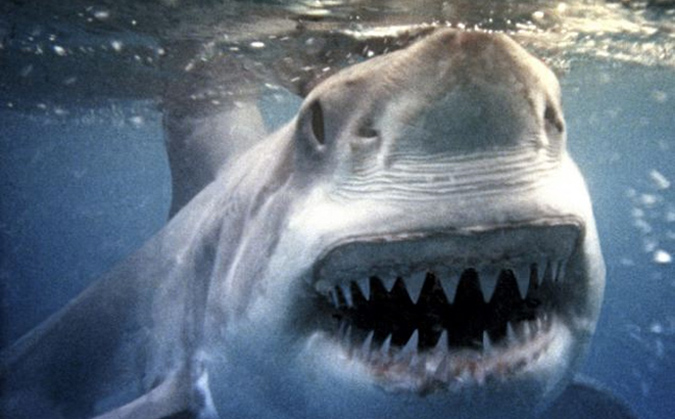 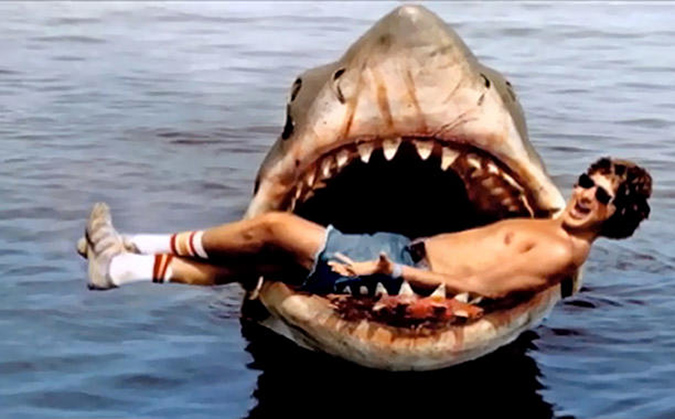 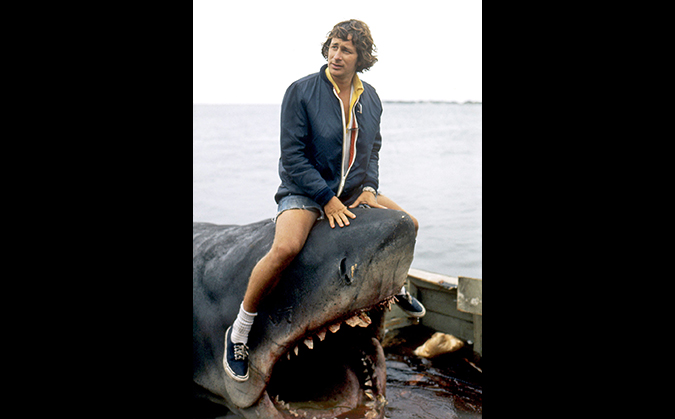 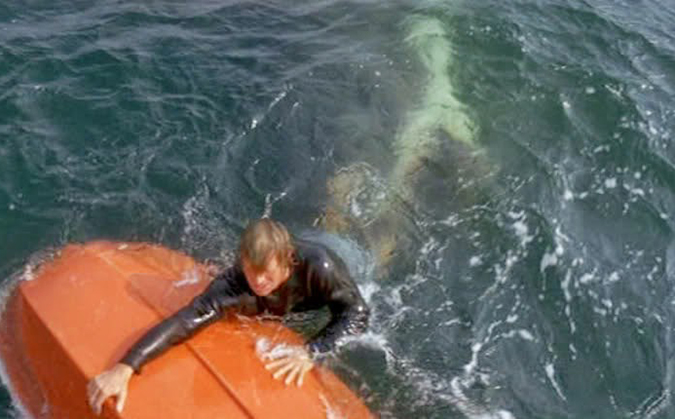 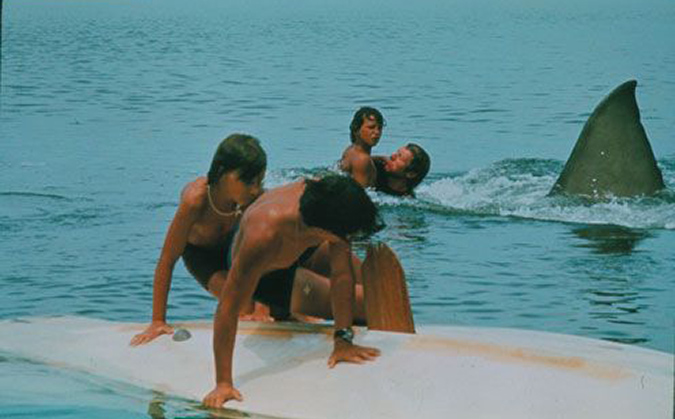 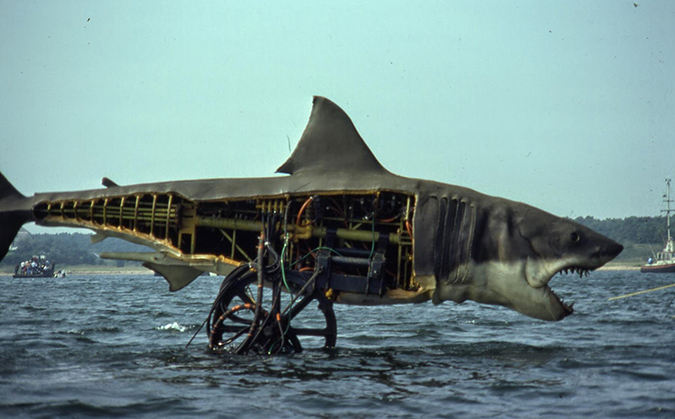 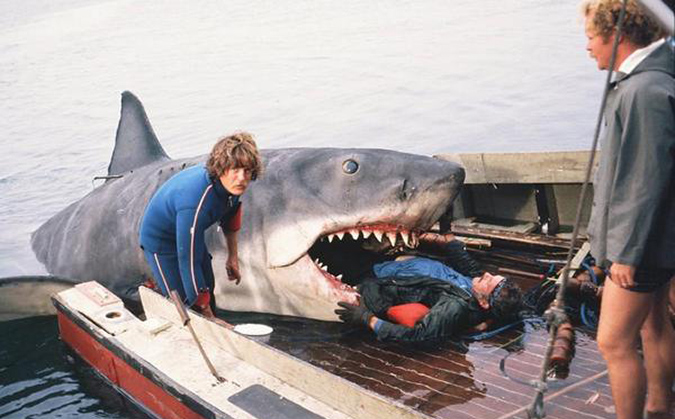 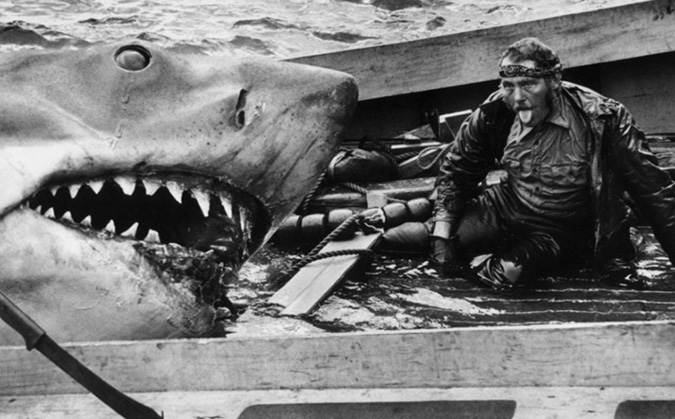 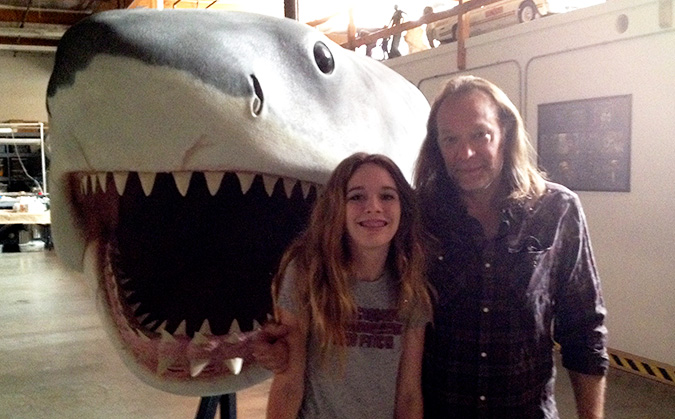 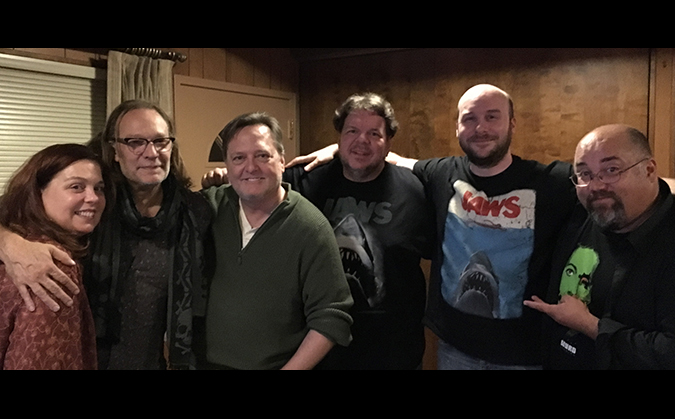 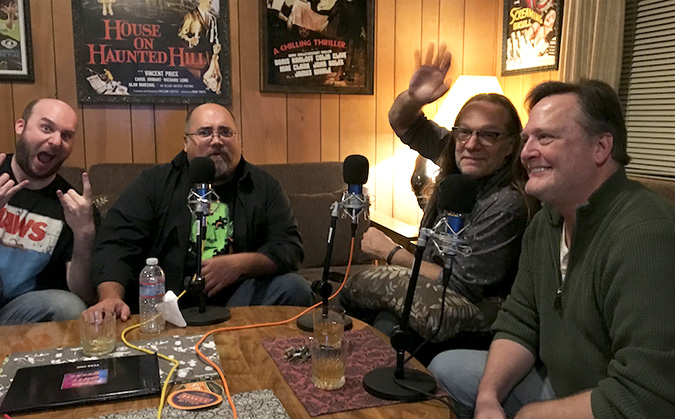 We also discuss the pop culture phenomenon of JAWS scaring audiences out of the water and into theaters for repeat viewings, and the unique attempts to merchandize a profit off the film’s blockbuster popularity. Greg gives his own insights into how learning from directors like Spielberg, George Romero and John Frankenheimer aided his own approach to directing episodes of THE WALKING DEAD as well.

Enjoy Part 1 of our supersize podcast with Greg Nicotero! Soon we’ll publish Part 2 of our evening with Greg in which we talk more about JAWS, as well as his earliest work with George Romero making DAWN OF THE DEAD, and much more.

Trivia: future director of ANIMAL HOUSE and AMERICAN WEREWOLF IN LONDON, John Landis, visited the shooting location of JAWS on Martha’s Vineyard. He accompanied producer Michael Phillips, who had hired Landis to rewrite a script that would eventually be made into CLOSE ENCOUNTERS OF THE THIRD KIND. During his visit intended to introduce Landis to Spielberg, the JAWS director was largely unavailable for the meeting due to all the mechanical shark problems. Landis tells the tale of how he was on location to witness the shark sinking in the ocean, and how he helped build the break-away dock for a scene building up suspense about the (broken) shark’s appearance in the film.

Trivia: actor Charlton Heston was originally considered to play the role of Chief Brody in JAWS. But director Steven Spielberg eventually decided against casting Heston, figuring his leading man acts of heroism displayed in AIRPORT ’75 and EARTHQUAKE would make audiences assume the shark would inevitably die long before it battles Brody in the finale.

On Location on Martha’s Vineyard