The Damn Dirty Geeks drop into Uncle Ira’s Basement for another mini-podcast episode as Frank Dietz and Frank Woodward put their normal-sized heads together to discuss Universal’s 1955 sci-fi classic THIS ISLAND EARTH, a fun iconic film with Metalunans, Mutants and interocitors.

Starring Jeff Morrow, Faith Domergue, Rex Reason and a pre-GILLGANS ISLAND Russell Johnson, this Technicolor adventure with bulbous brained aliens exploded across movie screens with a unique plot twist for 1950s science fiction films as the inhabitants of Metaluna seek help from humans on Earth — at least, that’s how it starts! What follows is a pinwheeling ride across the galaxy to a battle ravaged planet as a somewhat kooky cautionary tale about the excesses and apocalyptic cost of war, not to mention giant brain-headed aliens wearing futuristic pantsuits. 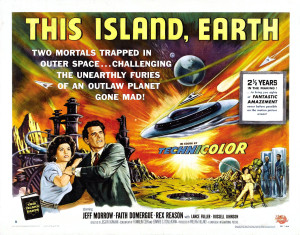 Frank and Frank have a blast revisiting this classic yet somewhat campy sci-fi treasure, discussing the design crossover connection between THIS ISLAND EARTH and THE CREATURE FROM THE BLACK LAGOON, 1950s heroine actresses and the peril of wearing giant alien head masks. For the record, Frank Dietz has not forgiven himself for confusing James Arness with James Whitmore in THEM! but he hopes you listeners will pardon him. #nerdproblems

Watch the 1955 THIS ISLAND EARTH theatrical trailer on YouTube.

If your interocitor can’t dial up this podcast episode, you can listen to and download it with the player and link below!

Trivia: Woodward asked if THIS ISLAND EARTH would be considered a good film to pair up with FORBIDDEN PLANET, and he was right: both films were re-released together as a double feature for theaters in 1960! Dietz also mentioned that THIS ISLAND EARTH is so good that he’s glad no one’s tried to remake it — yet few people know that Universal planned to make a sequel to it in 1956. A script titled ALIENS IN THE SKIES was written with Rex Reason and Faith Domergue set to reprise their roles for a 1957 film release, but the head of Universal cancelled the Technicolor/CinemaScope project as too expensive before it could get into its pre-production phase.

MYSTERY SCIENCE THEATER 3000 THE MOVIE – get the MST3k movie sending up THIS ISLAND EARTH at Amazon.com 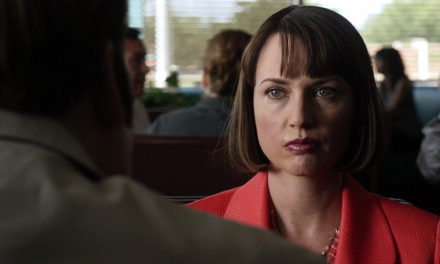 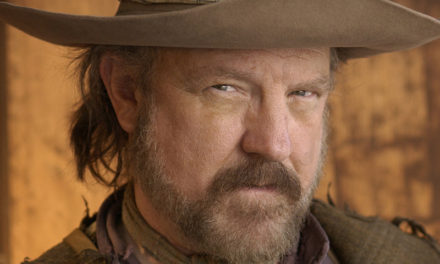