Throughout the Damn Dirty Geek’s four podcasts (and counting) discussing the STAR WARS films, we have discussed, debated and argued about how George Lucas’ Prequel Trilogy changed the meaning and context of classic moments from the Original Trilogy films that first made us fans of this universe. You can listen to our ongoing debate in Part 1, Part 2 and our FORCE AWAKENS preview episodes for more on our opinions about the Prequels to supplement this article.

Meanwhile, a fan made video has edited some Prequels scenes into a flashback through Alec Guinness’ memorable speech describing Anakin Skywalker’s death to his son Luke, as seen in Episode IV: A NEW HOPE (before it was subtitled that) in 1977. While Obi-Wan Kenobi’s tale to Luke was told as much to recruit, or at least encourage, Luke to join him on a quest to save Princess Leia and aid the Rebellion, it was only true from that dreaded “certain point of view” — a contentious phrase later introduced by Obi-Wan in RETURN OF THE JEDI. As Han Solo once said, this is where the fun begins.

As the Original Trilogy films rolled on, Vader reveled he is Anakin Skywalker, and Obi-Wan finally — reluctantly — told Luke (most of) the truth about his father’s fall to the Dark Side of the Force. Kenobi’s relationship to Anakin in the Jedi Order’s past became a murky shadow play, far from the simple, clear story that Obi-Wan first told Luke.

If fans thought Kenobi’s past got complicated by RETURN OF THE JEDI in 1983, the plot twists really hit the fan as Lucas boldly revised his own mythology again in the Prequel films, especially about the troubled apprentice/teacher relationship between Obi-Wan and Anakin in their younger years in the Jedi Order.

One of the problems the DDG have pointed out about Ben and Luke’s relationship is that the Prequels undercut much of what Obi-Wan told Luke about his father in the first place — words that defined for audiences what Anakin’s character was, or perhaps should have been, in the overall mythology. The Prequels showed that Anakin and Obi-Wan never really acted as “brothers” as Kenobi maintains even in their fiery finale at the end of REVENGE OF THE SITH. Their padawan/master relationship was conflicted at best, with Anakin growing more rebellious and selfish as his powers grew, eventually resulting in Anakin’s tragic defeat at the hands of Kenobi that soon birthed Darth Vader as the exterminator of the Jedi.

We can’t tell if YouTube user Shahan Reviews ever heard the DDG discussion about how the Prequels did a great disservice to Obi-Wan’s character, but watching his video edit of Guinness’ 1977 speech to Luke sure lines up with our thoughts on the topic — even if it can’t erase the Prequels’ revisionist effect on the Original films and Kenobi’s character.

Watch below and then let us know if this fan edit of the scene helps restore some of Kenobi’s valor and honesty about his former student, fallen to the Dark Side, and his efforts to train Anakin’s own son to eventually redeem his fallen father. If nothing else, this fan video takes an intriguing angle on how Obi-Wan Kenobi sees his own past, from a certain point of view. 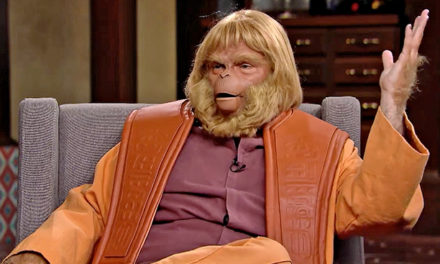 The DDG are a 2015 Rondo Hatton Classic Horror Award Nominee